The NW Rebels are from Oregon. We saw them play a little bit in the round-robin games. They have one very talented kid, but hockey is a team game. 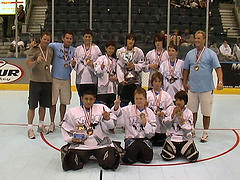 Both teams are undefeated going into the final. The Bulls have played Lucky Charms Green before in California tournaments, and have always beaten them, but the Charms have added a couple of very good players for this tournament.

Each team scores a power-play goal in the first period, and the score stays at 1-1 until 1:16 left in the game, when one of the Bulls kids takes a two-minute penalty for elbowing.

Had the Lucky Charms scored on the resulting power play, the kid who took the penalty — not the most popular kid on the team to begin with — probably would have been killed, but with 37 seconds left, another Bulls kid picks off a loose puck,skates between two defenders, and scores the game-winning goal short-handed.

Yes, victory is sweet, but it doesn’t necessarily make life any easier the next season or even the next day.
— Phil Jackson

Each kid got a medal and the team got a big silver cup, which they filled with lemonade and took turns drinking out of it. Then we all went out for pizza!

If you play roller hockey, winning NARCh is the best thing you can do, so it’s fun, it’s nice . . . it’s also the last tournament of a 9-month season, the last time these kids will play together as a team, and probably the last time some of them will see each other, as a couple of kids are moving out of the area, so it’s also a little wistful . . .