Get What You Want 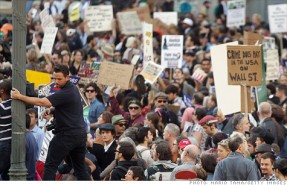 Why uptown? Because that’s where the rich folks live!

I’d have more respect for these rubes if they marched to the homes and looted them. That’s what they want, right? Forced redistribution of assets?

Break into the homes, beat people over the head and take their stuff. Fuck their wives, drink their scotch, smoke their cigars, put your feet on their desks.

Don’t just stand there waving signs like a bunch of losers. What problem is that intended to solve?

I was discovering that not all of the promises would be kept, that some things are in fact irrevocable and that it had counted after all, every evasion and every procrastination, every word, all of it.

— Joan Didion, “Goodbye to All That”