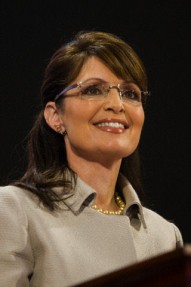 As Warner Baxter said to Ruby Keeler in 42nd Street:

You’re going out there a youngster, but you’ve got to come back a star!

Not yet another Ivy League lawyer, yet another warmed-over political hack, yet another condescending, posturing, preening, pandering, pontificating blowhard who’s lost sight of the fact that politicians are employees. We hire them, we pay them, we give them trillions of dollars to spend any way they want to . . . if we didn’t hold them to such ridiculously low standards of accountability, it might be easier to remember who works for whom.

And hockey moms are hot! Why? Because hockey’s an expensive sport, so hockey dads have to knock down a pretty good income, which in our materialistic society allows them to be more selective in the spouse department.

My wife is sort of a hockey mom, in that she has a kid who plays hockey, even though she hardly ever goes to the games or the practices.

But she supports McCain-Palin! And she’s looking forward to seeing Mrs. Palin kick Joe Biden’s ass in the vice-presidential debate.

“Argue with a woman?!” she shouts, shaking both fists in the air. “HA HA HA! You are just going to lose and lose!”